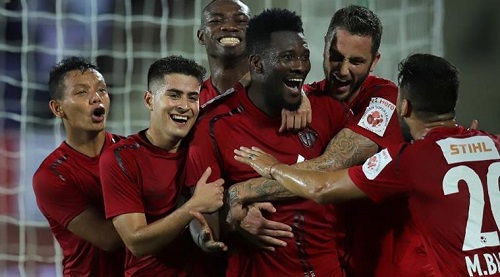 Asamoah Gyan's superb form for NorthEast United continues as he was on target for his outfit in a scoring draw game against Goa FC in the Indian Super League on Friday.

The Black Stars general captain scored in the second half in their 2-2 pulsating draw against the visitors in matchday 3.

Hugo Boumous opened the scoring for the visitors in the 30th minute which they held on till half time.

Asamoah Gyan restored parity for Guwahati-based club in the 54th-minute mark. He placed the ball beyond the reach of goalkeeper Mohammad Nawaz after going past his marker. The goal is his second from 3 games after joining the club in September.

Redeem Tlang who scored in NorthEast United game against Odisha over the weekend found the back of the net again in the 74th minute to put the Guwahati-based club ahead for the first time in the game.

However, Manvir Singh scored a late goal for Goa FC to snatch a point for them.