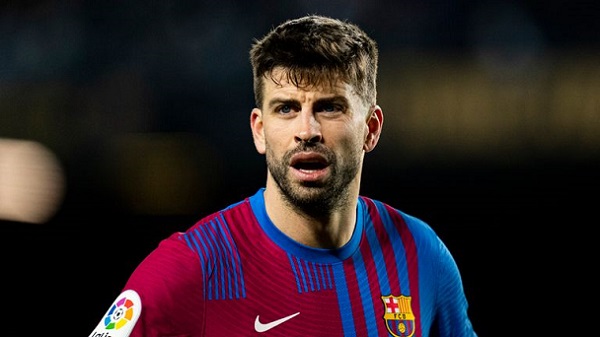 Barcelona defender Gerard Pique says he is to retire from football after his final game at the Nou Camp on Saturday.

The 35-year-old, who came through the ranks at Barcelona and had a four-year spell with Manchester United, made the announcement in a video posted on social media.

"I've always said that there would not be any other team after Barca and that's how it will be," he said.

Pique was a youth player with Barca until 2004 when he signed for Manchester United. He was a fringe player for the Red Devils when they won the Premier League and Champions League in 2007-08, and rejoined the Catalan giants in 2008.

During his time at Barcelona he has played more than 600 games and won 30 trophies, including eight La Liga titles, three Champions League trophies and seven Copa del Rey titles.

This season Barcelona have crashed out of the Champions League and are second in La Liga, one point behind Real Madrid.

Pique retired from international football in 2018 after winning 102 caps for Spain, and claimed the 2012 European Championship and 2010 World Cup.

"And now that all that kid's [himself] dreams have come true I want to tell you I have decided that now is the time to bring this journey to its end."

He also teased he would return to Barca's famous ground, saying: "You know me, sooner or later I will be back. I'll see you at Camp Nou. Long live Barca. Always."

Barcelona have debts of £1bn. In the summer Barca's members - who own the club - voted in favour of allowing president Joan Laporta to execute some exceptional measures, which have become known as economic 'levers', in order to raise a significant cash injection.

However, many players including Pique were asked to take major wage cuts to aid the club.

But Barca failed to reach this season's lucrative knockout stage of the Champions League and more cost-cutting may now need to take place.

Pique owns Spanish second division club Andorra and is a businessman outside football.

He is the founder and chair of Kosmos Tennis, who entered into a $3bn partnership with the International Tennis Federation in 2018.

In June, Pique announced his separation from his partner, singer Shakira, who he shares two children with.

According to Spanish football expert Guillem Balague, he is willing to forgo about 40m euros that was due over the remainder of his contract, which ran until 2024, but not what the club owes him from deferred payments during the pandemic.