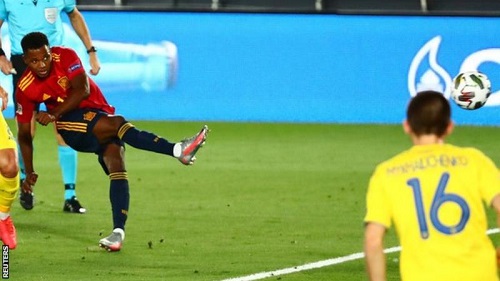 Barcelona forward Ansu Fati broke a 95-year national record to become Spain's youngest goalscorer at the age of 17 years and 311 days against Ukraine.

Fati - also the youngest goalscorer in Champions League history and Barcelona's youngest scorer in La Liga - curled home a fine 20-yard shot off the post on his first start.

He had already won a penalty, scored by Sergio Ramos, as he became the youngest player to start a Nations League match.

Ramos added a header in the win.

The Real Madrid defender has now incredibly scored 10 goals in his last 15 caps.

The 34-year-old has 23 goals for his country, as many as the great Alfredo di Stefano.

Manchester City defender Eric Garcia, 19, made his debut as a second-half substitute while new City signing Ferran Torres scored a late fourth with a volley at the far post.

1 - Ansu Fati in his first start for Spain 🇪🇸:

Fati, who was born in Guinea-Bissau but moved to Seville aged six with his family, became Spain's youngest player in 84 years when he made his debut in last Thursday's 1-1 draw away to Germany.

Juan Errazquin was the previous youngest scorer, against Switzerland in 1925 at the age of 18 years and 344 days.

Ethan Ampadu - who played for Wales against Bulgaria earlier on Sunday - was the previous youngest player to start a Nations League game, aged 17 years and 357 days against the Republic.