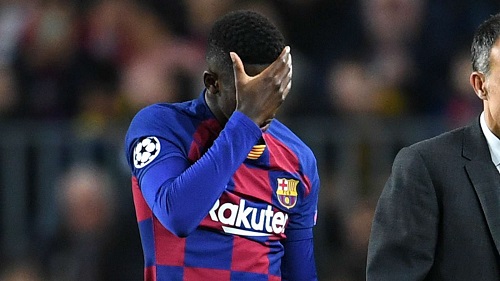 BarcelonaÂ have confirmed that Ousmane Dembele will miss the rest of the season after undergoing surgery.

The winger was already recovering from a hamstring injury when he suffered another setback in training last week.

Scans confirmed he hadÂ ruptured the tendon in his proximal hamstring in his right thigh and he was sent to Finland for an operation.

Now the Catalan side expect him to be out of action for around six months, ruling him out for the rest of the campaign.Â He will also likely missÂ Euro 2020Â withÂ FranceÂ as a result.

The news means Barcelona will be allowed to make an emergency signing outside of the transfer window due to fitness problems.Â Spanish FA (RFEF) rules say a team can sign a player from another Spanish side if they have a player ruled out for five months or more.

The Camp Nou outfit are also without injured striker Luis Suarez, who had knee surgery last month and is also not expected to return this season.

Quique Setien's team tried to bring in another attacker in the January transfer window to replace theÂ UruguayÂ international, but were unable to agree a deal for any of their targets.

Real BetisÂ forward Loren was next in line, while there was also interest inÂ InterÂ striker Lautaro Martinez,Â Â Arsenal's Pierre-Emerick Aubameyang and Fernando Llorente ofÂ Napoli, but no deal came to fruition before the transfer period ended.

Reports suggest that the club will now try to lure Willian Jose fromÂ Real Sociedad, having also considered a move for him last month. The 28-year-old Brazilian joined the Basque outfit in 2016 and has netted eight times in 22 appearances in the Spanish top-flight this season.

Barcelona are three points behindÂ Real MadridÂ at the top ofÂ La LigaÂ after 23 matches. Their next game is against Getafe on Saturday.