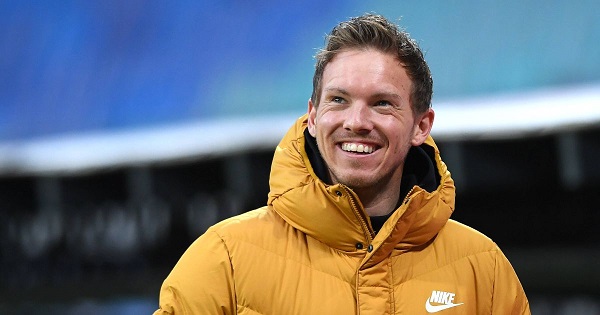 Bayern Munich have announced that Julian Nagelsmann is to become their new manager, with the Bundesliga champions reportedly paying up to €25 million (£22m/$30m) compensation to RB Leipzig to land the highly-rated coach on a five-year contract.
Shares

Bayern Munich have announced that Julian Nagelsmann is to become their new manager, with the Bundesliga champions reportedly paying up to â‚¬25 million (Â£22m/$30m) compensation to RB Leipzig to land the highly-rated coach on a five-year contract.

After learning of Hansi Flick's desire to walk away from his role at the Allianz Arena when the 2020-21 campaign comes to a close, those in Bavaria have wasted little time in getting a successor lined up.

They have not had to look far for a top candidate to fill the most demanding of roles, with Nagelsmann being lured away from domestic rivals on a long-term agreement that will begin on July 1 in a deal which makes the 33-year-old the most expensive coach in history.

"Despite his young age, he has had an impressive career. We are convinced that with Julian Nagelsmann we will build on the great successes of the past few years.

"I would like to expressly thank Hansi Flick on behalf of FC Bayern. He took over our team in a difficult phase in 2019 and then won six titles, the seventh will hopefully follow soon. He will always have a place in the history books of FC Bayern. We wish him all the best for his future."

"I am convinced that we will shape the sporting future of FC Bayern very successfully together with Julian Nagelsmann.

"My thanks go to Hansi Flick. With great football, he has led FC Bayern to great success. Now we have fulfilled his wish to leave FC Bayern before the end of his contract. All the best, Hansi!"

Sporting director Hasan Salihamidzic went on to say: "The discussions with Julian were very cooperative, very constructive. We'll have a lot of fun with him, I'm sure of that.

"I would like to express my thanks to Hansi Flick. After he took over the position of head coach a good one-and-a-half years ago, we celebrated numerous victories and titles, the treble in 2020 was the highlight. These successes will remain associated with his name. I wish him all the best on his future path."