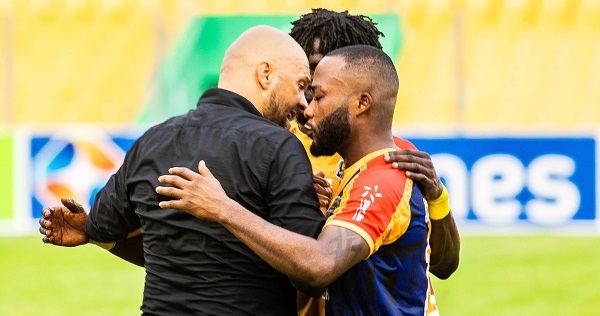 Accra Hearts of Oak came from behind to beat Bibiani Gold Stars 2-1 on Matchday four of the betPawa Premier League on Saturday.

The Phobians, for the first time in two seasons played under a new Coach in the Ghanaian top flight following the dismissal of Samuel Boadu and hiring of Slavco Matic.

The former League champions went into the game seeking to correct the wrongs by winning their first League game and also to appease their fans after their excruciating exit from the CAF Confederation Cup. Prince Owusu Kwabena’s sublime curler from the edge of the box beat Richmond Ayi to give Gold Stars a solitary lead inside 9 minutes.

The Bibiani lads held on until goalkeeper Joseph Baah was sent off for an off-the-ball incident that looked like an assault against Hearts of Oak striker Yassin Ouatching. Gold Stars kept their composure by stopping the attackers of Hearts of Oak from functioning until substitute Isaac Mensah equalised from close range before in the 78 minute to restore some pride for the Phobians.

With just a few minutes to end proceedings, Gladson Awako scored the winner with a spectacular free kick in the 88 minute to give Hearts of Oak their first league victory of the season.

In other results Mezack Afriyie scored at the El wak Sports stadium as Berekum Chelsea held Legon Cities to a 1-1 draw.
The Citizens were flying high in the League following two consecutive wins against Tamale City and Real Tamale United. Alex Aso drew the first blood for Cities inside 59 minutes before Chelsea equalized 64 minute through Mezack Afriyie.

At the Akoon Park at Tarkwa – Medeama SC were pegged back by former Champions Aduana FC in a 1-0 loss.

The win extends Aduana’s unbeaten as they have gone four matches without defeat. The Ogya lads kicked off with a win against Hearts of Oak and King Faisal before coming from behind to draw 2-2 with Samartex on Matchday three. Godfred Poku Wakii scored in the 20 minute to give them the three points, their third in the season.

Dreams FC had their dreams shattered by Accra Lions at the threatre of Dreams at Dawu. The Still believe lads conceded through Hunalf Mohammed’s 76 minute strike.

New entrants Nsoatreman FC were big winners on Matchday four as they romped to a 3-0 win against Karela United FC on Sunday. Stephen Diyou netted in the 6 minute to give the hosts a well-deserved opener, Yakubu Mohammed added the second goal inside 33 minutes before Diyou got his brace and third goal of the match in the 68 minute for Nsoatreman.
Finally at Fosu Gyeabuor Park – Bechem United beat Kotoku Royals 1-0 courtesy of a Cephas Mantey strike in the 52 minute.

On Monday, Champions Asante Kotoko will clash with arch rivals King Faisal in the Kumasi derby at the Baba Yara Sports stadium. Tamale City who have yet to win a match in the League welcome sworn rivals Real Tamale United to the Aliu Mahama stadium while Samatex FC host Accra Great Olympics at the Nsenkyere Sports Arena.