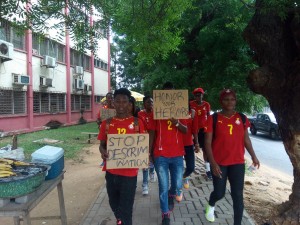 The Queens marching to the Ministry

The Black Queens of Ghana have taken an uncompromising step in demanding for their unpaid bonuses after marching to the Ministry of Youth and Sports to express their grievances.

The Queens are owed $25,000 each after participating in the 2017 Africa Women's Championship in Cameroon where they finished third.

Though they could not meet the Minister of Youth and Sports, Nii Lantey Vanderpuye, their intentions were clear as they had several inscriptions on placards like “Stop discrimination,” “Honor your Heroes” and so on.

The team earlier went to the Ghana Football Association(GFA) where they also made demands for their money.

In a move which appears like attacking the right source, the Queens then decided to demonstrate against government as they appear to have lost patience and trust in government.

The battle for bonuses between the female teams and the Ministry of Youth and Sports is gradually becoming a regular occurrence as the same happened after the All African Games where players decided not to leave their hotels accept they are paid owed bonuses.