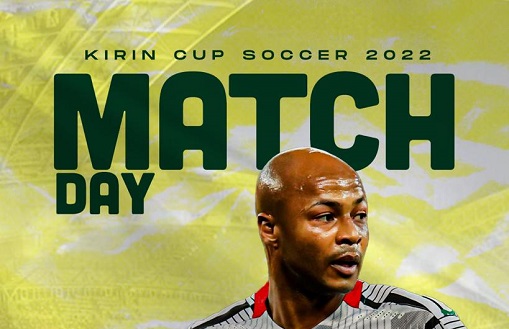 The Black Stars of Ghana will this morning take on Samurai Blue of Japan in 2022 Kirin Cup in Japan.

The Black Stars coach Otto Addo says he is relishing the opportunity of the tie scheduled for a 09:55 GMT at Misaki Park Stadium.

Otto Addo's side are on a four-game unbeaten streak after qualifying Ghana to the World Cup and also having a good start in the AFCON qualifiers.

Otto Addo speaking ahead of the game said he expects a tough Japan test as the Asian side have good players.

It will be the 21st edition of the international friendly football tournament, with the last one taking place in 2016. Japan was in the final of that edition, losing 2-1 to Bosnia-Herzegovina.

Ghana has been invited to compete for the first time in the history of the tournament.

READ ALSO: Black Stars: Know the 18 players to participate in the Kirin Tournament

Coach Otto Addo is expected to use the tournament to test the readiness of his team ahead of the FIFA World Cup Qatar 2022 which kicks off on Monday, November 21, 2022.

The winner of the Japan vs Ghana match will play the winner of the match between Tunisia and Chile for the finals while the two losing teams slug it out for the third place.

The four-time African champions have assembled eighteen players for the tournament including Hearts of Oak duo, Daniel Afriyie Barnieh, and Dennis Korsah.