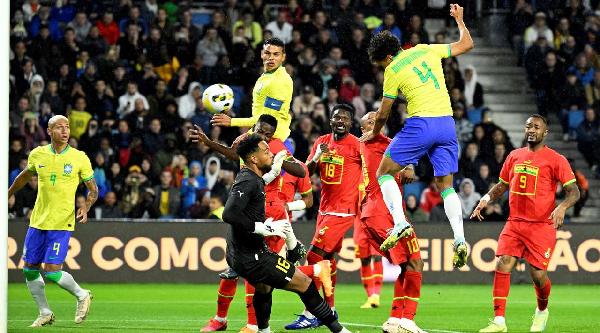 Brazil cruised to victory against the Black Stars of Ghana in a one-sided game at the Stade Oceane Le Havre in France.

The Black Stars were no match for the South Americans as the latter won the game 3-0.

Ghana were unable to create anything meaningful in the opening 45 minutes as the Brazilians pinned them in their own half and they found it difficult to break the press.

Brazil started the game the better of the two sides and scored an early goal in the 8th minute after Marquinhos rose highest to coolly plant home from Rahinpha's corner.

This was before they had squared two goal-scoring opportunities through Richardlison and Pacqueta.

Minutes later Vinicius Junior sprayed a pass out to Raphinha but he produced a poor effort from inside the box, therefore unable to increase Brazil's tally.
Brazil finally doubled their lead in the 27th minute after Richarlison neatly finished off a well-worked move.
The Tottenham forward on the 40th-minute mark made it 3-0 for Tite's side when he flicked home Neymar's freekick from close range for his second on the day.
Both coaches made a plethora of changes in the second half which change the tempo of the game.
Andre Ayew came close to reducing the deficit for the Black Stars when he rose to meet a cross but his header came off the woodwork.
Black Stars will in four days' time play Nicaragua before finishing their pre-World Cup friendlies against Switzerland on November 17 ahead Qatar 2022 tournament.

The Black Stars will take on Portugal (November 24), South Korea (November 28) and Uruguay (December 2) in Qatar.