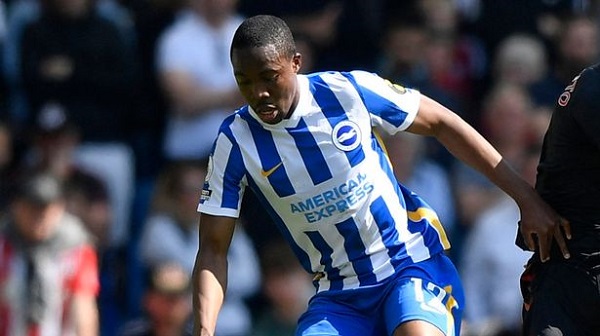 Brighton star Enock Mwepu has been forced to retire from football aged 24 after the discovery of a potentially fatal hereditary heart condition.

The Zambian was taken ill during the recent international break, with subsequent tests identifying his condition and forcing him to hang up his boots.

Mwepu's condition "manifests later in life" - and had not shown up in previous cardiac readings.

Following medical tests the Prem star was advised that playing on would leave him at risk of a cardiac arrest - forcing him to quit the game he loves.

Announcing his retirement, Mwepu wrote in a statement: "A boy from a small Zambian township called Chambishi has some news to share.

"He stood strong to follow his dreams of playing football at the highest level, and by the grace of God he lived his dream by reaching the Premier League.

"Some dreams however come to an end, so it is with sadness that I announce the need to hang up my boots because of the medical advice I have received.

"This is however not the end of my involvement with football, I plan to stay involved in some capacity.

"I would like to take this opportunity to thank everyone that supported me in my football journey, including my wife and family, my agent 12MAN, the Zambian FA, all my previous clubs, team-mates and coaches, and specially everyone at Brighton & Hove Albion."

Mwepu arrived at the Amex from Red Bull Salzburg for a club record fee in 2021.

He impressed during his debut season on the South Coast, and featured in their opening six games of this term.

Amid the shock news, Brighton boss Roberto De Zerbi said: "I am so sorry for Enock.

"Before I arrived I looked at all the squad, and he was a player I was so excited and looking forward to working with. We will do everything we can to help him."

Seagulls chairman Tony Bloom added: "We are all absolutely devastated for Enock.

"He and his family have had a traumatic few weeks and while we are just thankful he has come through that period, he has seen such a promising career cut short at such a young age.

"As a club we will give him all the love, help and support we possibly can to make a full recovery, and then as he decides on the next steps in his life."

Explaining the decision, Brighton's head of medicine and performance Adam Brett said: "It is a terrible blow for Enock, but he has to put his health and his family first and this is the right choice, however difficult it is to quit the game he loves.

"Of course, given this is Enock’s career and a decision which can’t be taken lightly we have taken our time to be as thorough as possible, completed advanced cardiac investigations and collaborated with clinical experts to gain the best second opinions for Enock.

"We will be helping him make sure the condition is managed with the appropriate treatment for him to otherwise live a long and healthy life.’"