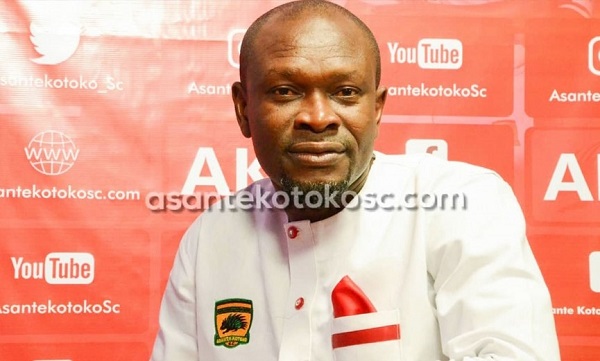 Charles Kwabena Akonnor has eulogized the entire fraternity of Asante Kotoko for their roles played in helping his outfit reach the group stage of CAF Confederation Cup.

The former Black Stars winger, assumed duty as coach of the Kumasi-based side in October last year, signing a three-year deal to replace Samuel Paa Kwasi Fabin and has masterminded the Reds first qualification of the CAF Confederation Cup since 11years.

Despite this historic feat, coach C.K Akonnor, however, says praises should not be given to him alone but it's a collective effort.

“It’s not only me who deserves the commendation for reaching the group stages.

“Most of all the commendation goes to God, and then Dr Kwame Kyei, the management and everyone,” he told the media.

The 44-year-old also thanked the fans for their massive support throughout the round one and playoff stages.

“Let me also congratulate the supporters, their earnest support is massive and I hope it will continue whether good or bad times.”

The Porcupine Warriors will leave the shores of Ghana for Sudan on Thursday, January 31.

They play Al Hilal on Sunday(Feb 3) in the opening game of the group C at Omdurman.

The Auditor-General, Daniel Domelevo, has asked the Deputy Minister of…