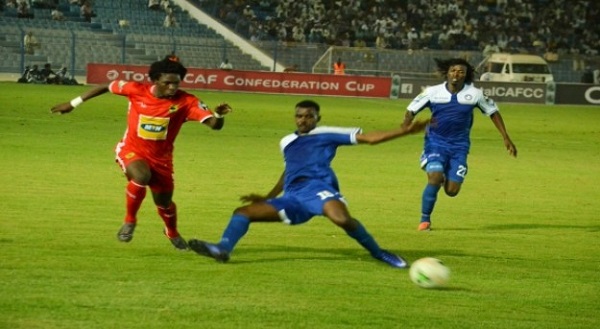 Al Hilal ended Asante Kotoko's unbeaten run in the 2018/2019 CAF Confederation Cup as they inflicted a 1-0 defeat on the Reds on Sunday.

Waleed Bakhet Hamid scored the game’s only goal inside the 40th minute to end the first half in favor of the hosts.

Abdul Fatawu Safiu nearly pulled parity for Asante Kotoko a minute later, but his strike bounced on the crossbar before heading to safety.

Al Hilal forced a couple of good saves from Kotoko's custodian Felix Annan as the Reds sat off in the first half.

The Reds lifted up their game in the second half, enjoying more possession, but falling short of goal scoring opportunities.

Asante Kotoko host Zesco United in day-two of the group stage at the Baba Yara Stadium in Kumasi on Wednesday, February 13, 2019.

Following this result, Asante Kotoko are currently 3rd of their group, they play next to group leaders Zesco United who beat local rivals Nkana FC 2-0.

C.K. Akonnor didn't seem to be a happy man after the game and stated that he is baffled by his players' performance in the first department of the game.

"My boys didn't play to my expectation in the first half and conceded a goal that was avoidable. We expressed ourselves well in the 2nd half but couldn't get the needed equalizer".

Felix Annan 8 – Hard done. Made some wonderful saves throughout the match, but when you are constantly under siege and left high and dry by an inept defense, you can only do so much. Honestly, probably one of his better matches, from an individual standpoint. Had one spilled save, but he reclaimed it. Everything else was handled well, despite the constant state of desperation he was in.

Amos Frimpong 7 – Showed so much ambition to get forward in the game but failed with his crosses. Defensively, he was solid and the Blue Waves had no threat down his flanks at all in the game.

Augustine Sefah 8 – Regained his position in the Kotoko starting XI after a game suspension and he put in a much better show in the second half, getting forward well. However, defensively he was a suspect with Idriss Mbombo Ilunga giving him a tough time. A couple of times in the second half he was exposed in behind, with the Reds were able to deal with it quite well as Al Hilal lacked much-attacking edge.

Abdul Ganiyu 7.5 – Picked up the only yellow card in the game. A couple of important blocks in the first half and his positioning was superb throughout the game and really was impressive to nullify most attacks from the Blue Waves.

The second half was similar, he didn't put a foot wrong in the game.

Agyeman Badu 7 – A pretty easy evening but he was composed during the match and even dealt very well with the threat from the Al Hilal attackers.  Notably, not as many long balls forward, instead playing through the midfield, but his defense and passing were on point once again. Maybe he was caught ball watching that resulted in the Bakhet's only goal in the game but apart from that, he didn't really put a foot wrong in the game.

Richard Senanu 6 – Another energetic, battling display from the Spaniard who was key in winning the ball back for us numerous times. Senanu made a number of important tackles and interceptions inside Kotoko own half and around their own penalty area.

Kwame Bonsu 8 – Boubacar Diarra was the man tasked with keeping an eye on the former Gifle IF man but really he didn't get close enough to him and he was able to dictate play a lot better than he has recently. Played some excellent passes but wasn’t a goal threat himself last evening.

Emmanuel Gyamfi 6 –  A very quiet evening for the speedster. Started on the right, but really he just drifted all other the pitch, and in the end, it didn't really make much difference. Was looking to link up with Yacouba, but it didn't really work for a lot of the first half. But in the second half, he was hardly in the match. Completely on the periphery of the match without getting any chance to influence the game and eventually replaced by Steven Nyarko.

Maxwell Baakoh 7 – Charged around with seemingly endless enthusiasm but left the Reds undermanned in midfield when he tried to get forward.   Looked lost at times out on the left wing. Dropped deep and central to get involved but never a threat on Jamal Salim's goal.

Fatawu Safiu 7.5- started as a supporting striker, No problems on his side of the pitch. He and Yacouba combined well and Fatawu did a great job getting forward. Had a couple dangerous balls in the opposing goal box and was a threat throughout hitting the cross in the 41st minute with his stunning strike.

Sogne Yacouba 8- The Burkinabe's goal drought in the campaign continued at the Al Hilal Stadium last evening. Tried incredibly hard throughout the match, though in the second half, when all hope was lost, he faded along with everyone else. Much like Safiu, you can only do so much when there is nothing in the works around you. Created a bit for himself, and pressured decently enough, but this strike tandem was set up to fail.

Steven Nyarko 5- Entered from the bench to make his debut in the campaign last evening in Sudan and was asked to do the pivot role but with the game already lost, he really did not have much to offer the Reds.

Prince Acquah 5- He came on to replace Fatawu Safiu but not much time to make an impact. Had a couple good defensive plays though, despite hardly playing.