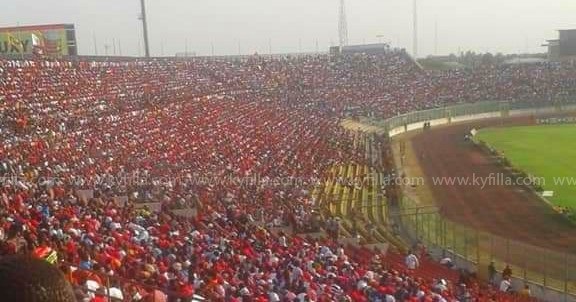 As part of the exercise to create an intimidating atmosphere at the Baba Yara Stadium, Asante Kotoko management has line up activities to rally support for the team in Wednesday's CAF Confederation Cup tie against Zambian side Zesco United.

The Porcupine Warriors will lock horns with the Zambians in matchday two of the Confederation Cup at the Baba Yara Stadium in a 1 PM kickoff game.

Management will be embarking on a publicity drive that will see it go to the workplaces and homes of the supporters to remind them of the game and the need for them to show up at the stadium in their numbers.

A press release signed by the Director of Communications, Samuel Sarfo Duku (Esq), says the idea is to get the supporters to fill the Baba Yara Stadium to the rafters on the match day.

"As part of measures to ensure that we get a fully packed Baba Yara Stadium on the match day, Management will, on Friday and Saturday, embark on an awareness drive at the Suame Magazine in Kumasi," says the statement.

"We will meet with the artisans and traders at their shops and locations within those environs to drum home our need for their presence at the Baba Yara Stadium."

"Management will, within the same period, also visit the Kumasi Business District, the notable market centres and artisan catchment areas both in and out of the metropolis to sell the game to our supporters in those areas."

"Management has resolved to also visit the offices of public and private establishments in Kumasi and its environs to remind our supporters of the game and also impress on the directors and departmental heads to allow their employees to be at the stadium."

"It is one of our key responsibilities as Management to whip up enthusiasm in our supporters to get them to troop to the stadium in their numbers to cheer on the team, and it has become necessary that we embark on the aforementioned activities because the game is fixed for a working day and at 1 PM when workers will normally be active at work," explains the statement