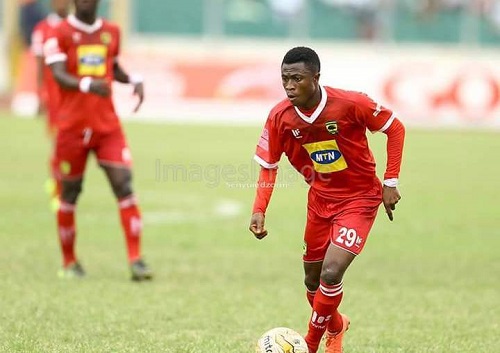 Asante Kotoko winger Emmanuel Gyamfi is optimistic about his outfit chances of making it into the next stage of the CAF Confederation Cup ahead of San Pedro.

The Porcupines hold a slim advantage over the Ivorians having defeated them 1-0 in Kumasi courtesy Naby Keita strike. The Guinean international scored from the spot with the last kick of the match to a hand the Kotoko a major boost heading into the second leg in Abidjan.

Speaking ahead of the second leg, Gyamfi said Kotoko have what it takes to make it into the next phase of the competition.

“It wasn’t an easy game. However, every win is important. It’s a plus that we didn’t concede. We are confident about our progress despite the 1-0 win we have had in Kumasi. We will definitely have a goal away and qualify to the next stage”.

He added, “We want to qualify and keep ourselves active so we will do whatever it takes to achieve that”.

The first leg of the Kotoko-San Pedro clash used two days to finished the game due to heavy downpour which led to the match been called off after the first half and continued on Monday for the remaining 45 minutes.

The Reds will be leaving the shores of Ghana on Friday to honour the second leg of against on Sunday, November 3.

The winner on aggregate progresses to the Group Stage of the Confederation Cup.