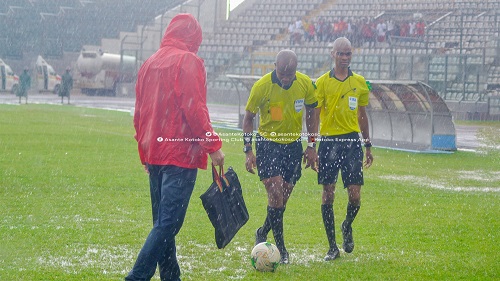 The ticket prices for the called off match between the Ghana Premier League giants Asante Kotoko and San Pedro has been announced.

The game was called off yesterday due to the soggy nature of the field which made it difficult for the second half time to begin.

The South African referee Eugene Nkosinathi Mdlule after inspecting the field and delibrations between the management of the two clubs and the match commissioner the game was called off.

The match is scheduled to be played today, October 28 as per CAF regulations and only the second half will be played.

A tweet from Asante Kotoko read: ''Please take note that the replay of our CAF Confederation Cup game against FC San-Pedro, scheduled to kick-off at 3 pm today at Baba Yara Stadium, now kick-off at 2 pm.''

Also, the management have reduced the match ticket for the game as both the centre line and popular stand is going for 5 cedis while the VIP stand is 10 cedis.