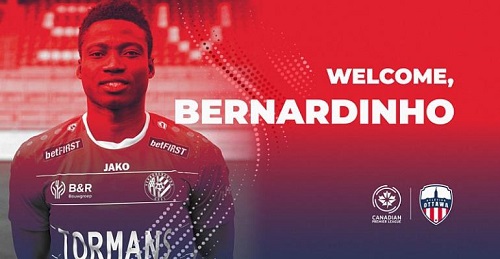 The club on Wednesday announced the signing of the GhanaianÂ midfielder who can also play as a winger.

The 23-year-old joined the newly-promoted side for an undisclosed fee from Belgian side KVC Westerlo.

Osah spent half of the 2019/20 season on loan at KSK Heist where he scored twice in 14 matches.

Reacting to his club's latest acquisition,Â Fernando Lopez hailed the Ghanaian arrival has he believes will improve their squad.

We are delighted to present Bernardinho as an AtlÃ©tico Ottawa player. He is a powerful attacking winger that can play in both sidelines of the pitch," the Chief Executive Officer told the club's official website.

"He is an athlete, physically very strong, consistent, fast, with good passing abilities, vision and solid dribbling skills. We are sure he will contribute to the team recovering balls, on the creation of plays, exploiting the offensive game and assisting and scoring goals."