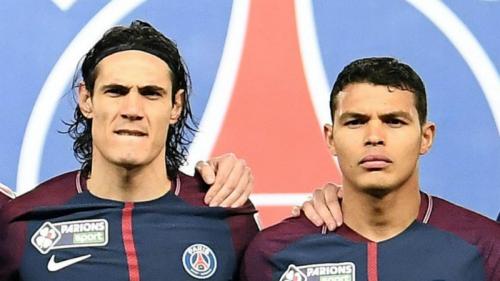 Edinson Cavani and club captain Thiago Silva will both leave Paris Saint-Germain this summer, director of football Leonardo has confirmed.

The pair are both out of contract at the end of June but will remain with the club until the season is fully completed with the Champions League, Coupe de France and Coupe de la Ligue all still to be resolved.

Between them, they have made more than 600 combined appearances for PSG in all competitions.

"Cavani and Thiago Silva? Yes, we are coming to the end,” Leonardo told the Journal de Dimanche.

"The idea is to continue playing with them until the end of August.

"It was a very difficult decision to make; these are players who have marked the history of the club.

“Their stories were so beautiful. But yes, we are coming to the end.

"We had to make a logical decision, economically speaking and with regard to the generation that is coming through.

“Maybe we are wrong, I do not know, there is never a perfect moment. Now the Champions League is still in sight and the idea is to continue competing with them until the end of August. How it can be done is not yet clear [legally].”

Leonardo also confirmed that Layvin Kurzawa and Thomas Meunier are also likely to leave in the same manner, but this is not yet totally certain.

PSG are through to the quarter-finals of the Champions League following their 3-2 aggregate win over Borussia Dortmund in the round of 16.

They are also waiting to play in the finals of both the Coupe de France and Coupe de La Ligue, against Saint-Etienne and Lyon respectively.

Uruguay striker Cavani has long been linked with a move away from PSG, and seemed almost certain to leave the club in the most recent January transfer window.

Atletico Madrid, Manchester United, Boca Juniors, Inter Miami and Newcastle are among a wide variety of clubs to have been linked with a move.

Boca are out of the race after president Jorge Bermudez ruled out a move earlier in the year, but Cavani's next club remains to be seen.

Cavani has scored 200 goals in 300 games for PSG, winning six Ligue 1 titles among numerous domestic honours since joining from Napoli in 2013.

Silva moved from AC Milan the previous summer, going on to make 310 appearances and captain the club through its most successful period.