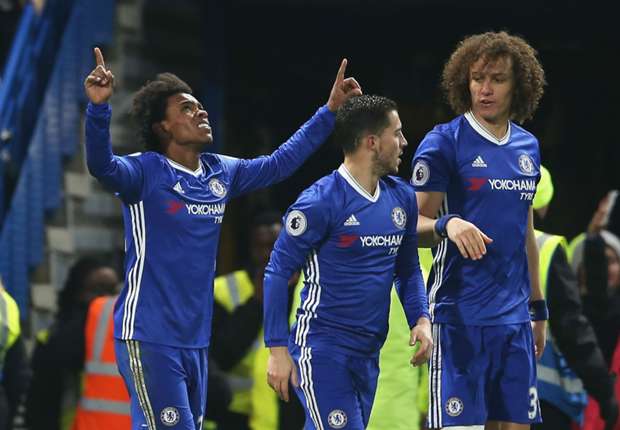 Chelsea equalled the record for the most successive wins within a Premier League season after making it 13 on the bounce as they beat Stoke City 4-2 to move nine points clear at the top of the table.

Gary Cahill fired the Blues into the lead at Stamford Bridge inside 34 minutes, rising highest to head in Cesc Fabregas' corner, but Stoke came firing out of the traps after the break and found an equaliser when Bruno Martins Indi slotted home from close range.

Chelsea were back in front on 57 minutes as Willian fired in after being teed up by Eden Hazard, only for Stoke to equalise for the second time on 64 minutes as Peter Crouch converted Mame Biram Diouf's pass.

However, the visitors were level for just a minute with Willian grabbing his second of the afternoon, finding the back of the net after a brilliant ball from Fabregas, before Diego Costa made sure of the result with a strike from a tight angle five minutes from time.

Chelsea have the chance to break the record for the most successive wins within a Premier League season when they take on Tottenham Hotspur on Wednesday.