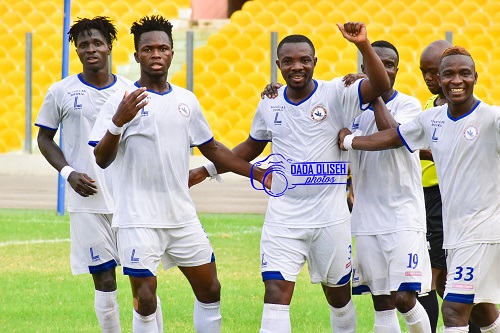 A Richard Kissi Boateng goal powered Berekum Chelsea to victory over Great Olympics after their disappointing outing against Inter Allies on Saturday.

The left-back scored the only goal of the game that picked the 3 points for the Blues as they bounced back from Saturday's shocking 3-1 home loss to Inter Allies.

The former TP Mazembe defender found the back of the net in the second half after both teams had held their lines very well in the first department of the game.

The search for King Faisal's first 3 points of the season continues after they shared spoils with Legon Cities at the Obuasi Len Clay Stadium.

King Faisal played a scoring draw game against the Royals in matchweek 11 of the Ghana Premier League.Â Benjamin Nii Okine shot Legon Cities into the lead on the stroke of halftime butÂ Ibrahim Osman restored parity for King Faisal in the 57th minute after his mate Kwame Preprah had missed a penalty 8 minutes earlier.

After having an impressive weekend of thumping Aduana Stars 5-2 at the Carl Reindorf Park in Dansoman, Liberty failed to make it double victories after they succumb to Bechem United.

The Scientific Soccer Lads got beat 2-1 at the Bechem Park.