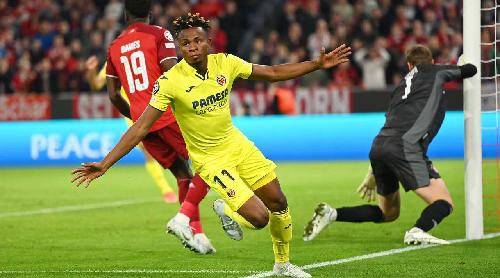 Samuel Chukwueze's goal two minutes from time sent Villarreal through to the Champions League semi-finals at the expense of Bayern Munich.

Villarreal's stubborn defence kept Bayern almost chanceless in the first half but Robert Lewandowski levelled the tie on aggregate with his first chance seven minutes into the second half.

The goal came from broken play when Daniel Parejo's ball in his own half was intercepted by Coman and Thomas Muller set up Lewandowski to squeeze his 16th goal of this year's tournament off the post.

Though Bayern had a wealth of possession in the Villarreal half after half time the only clear chances only fell to Dayot Upamecano and Thomas Muller, either side of the goal, and both failed to make goalkeeper Geronimo Rulli work.

Extra-time loomed until on the break Gerard Moreno produced a wonderful pass to the back post where Chukwueze, who had only been on the pitch four minutes, slammed the ball home into the roof of the net sending Villarreal to their first Champions League semi-final in 16 years.