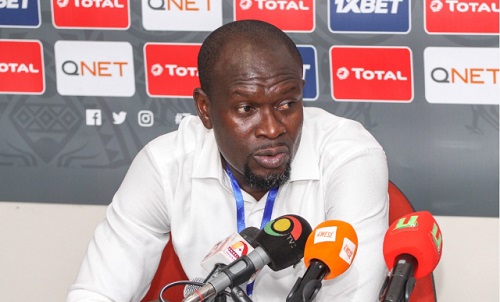 Black Stars coach Charles Kwablan Akonnor will today, March 3 release his squad for the upcoming doubleheader against Sudan, the GFA have announced.

The gaffer will be meeting the press atÂ Accra City Hotel to name his squad for the upcoming 2021 AFCON qualifying matchesÂ against Sudan.

Ghana will be hosting Sudan at the Cape Coast Sports Stadium on March 27 and then play the reserve fixture on March 30 inÂ Omdurman.

It will beÂ Akonnor's first assignment since his appointment as the head coach of the senior national team.Â Ghana top Group C with 6 points from 2 games.

The senior national team is set to host Sudan at Cape Coast Stadium on March 27 in Group C of the 2021 Africa Cup of Nations qualifying.

The game, which will be followed by a reverse fixture in Omdurman within three days is Akonnorâ€™s first as Black Stars coach.

The former national team captain had been in Europe for the past three weeks monitoring players for the team ahead of the doubleheader games.

The press conference is scheduled for Accra City Hotel (former Novotel) at 11 am.

CK Akonnor has been tasked to win the 2021 Africa Cup of Nations and also qualify the team to the Qatar 2022 FIFA World Cup.