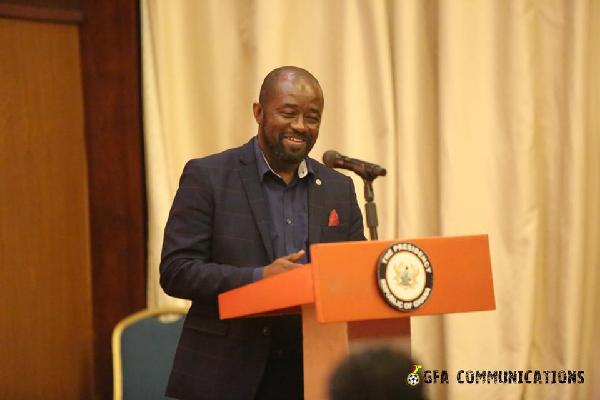 The Black Princesses on Tuesday, April 5, met with Vice President of Ghana Alhaji Mahamudu Bawumia at the Jubilee House in Accra.

The visit was as a result of the Princesses’ qualification to the 2022 FIFA U-20 Women’s World Cup.

President of the Ghana Football Association, Kurt Edwin Simeon-Okraku showed appreciation to the Government for their continued support to Women’s football development.

He took the opportunity to praise the Black Princesses for making history after earning qualification to their sixth consecutive appearance at the biennial tournament.

“I was here few days ago with the Black Stars but I forgot to add that before the Stars made it to Qatar, the Black Princesses had already made it to Costa Rica. If you have followed the women game, you’ll admit that when it comes to record setting, it has always been the women who have been the pacesetters especially when it comes to the World Cup.” he said.

‘’Few weeks ago, these beautiful Princesses qualified to the World Cup to be staged in Costa Rica. Your Excellency, what you see here today is as a result of a conscious effort of investing in the female sport, from your government through the sector ministry, the Football Association and our partners.

‘’I’m happy to say that since we took office two years ago, we have placed premium emphasis on the development of Women’s football. We got YEA to invest in the Women’s game, Decathlon Ghana, ZAZ, Woodin all believing in the way our football Association has been operating.

‘’Because of this investment, we are beginning to see results on the pitch. Our Football Association has been very interested in capacity building to close the knowledge gap in the industry. We engaged with UEFA assist to invest in the training of our officers who belong to the women side of the football ecosystem.

‘’These continuous investments are beginning to yield results and one of the foremost is the success story of Sekondi Hasaacas Ladies at the WAFU tournament and at the CAF Women’s Champions League through your support.

‘’Beyond that, our Women’s Premier League has also seen some investment and for the first time in Ghanaian women football, matches are shown live on Max TV and on our social media platforms.

‘’As a results of this, the Black Princesses who have been in camp through your support have made it to the World Cup.

‘’This will be the sixth time the Princesses will be at the World Cup. We will continue to invest in the Women’s sport and we will not discourage you to stop investing because that is the only way we can bring out the super talents and allow the dreams of our young generation to see the light of day.

‘’It is by continuous investment that we will raise the flag of Ghana high. The football Association will continue investing in the female sport which will give room for talents to find right platform to showcase their talents.

‘’That dream can only become a reality if your Excellency continue to support the girls and I believe that for what you have already shown, you will not renege on supporting our Black Princesses to go all the way to Costa Rica to make themselves and our nation proud’’ he added.

The Black Princesses and the Falconets of Nigeria will be Africa’s representatives at the World Cup which is slated for Costa Rica in August 2022.