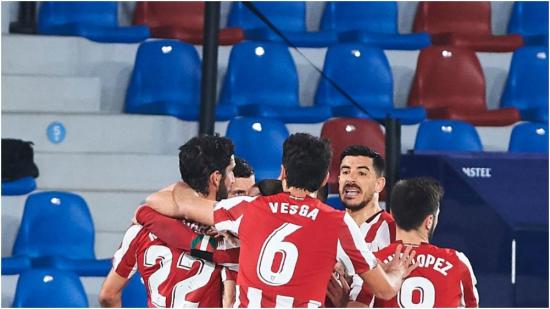 Athletic Bilbao defeated Levante in the Copa del Rey semi-finals - and will now play in two of the finals in April.

Bilbao reached last season's final and were set to play Real Sociedad before the coronavirus pandemic halted the competition, with that match now due to take place on 3 April in Seville.

But the 2020-21 event has carried on and Bilbao will meet Barcelona in that final on 17 April, again in Seville.

The first leg in Bilbao ended 1-1 and Levante, aiming to win the competition for the first time in their history, took the lead in the second leg thanks to a goal from Roger Marti.

However, Bilbao equalised through Garcia's penalty to take the tie to extra time, where Berenguer scored a 112th-minute winner to give them a 2-1 win in the second leg and a 3-2 success on aggregate.

Bilbao have won the competition 23 times, with their last success coming in 1983-84 and could now win, or lose, twice in the final in the space of two weeks.

Barcelona booked their place in the 2020-21 final on Wednesday with a thrilling fightback as they overcame a two-goal first-leg deficit toÂ beat Sevilla 3-0 after extra timeÂ to win 3-2 on aggregate.