Coronavirus: Barcelona vs Napoli to be played behind closed doors 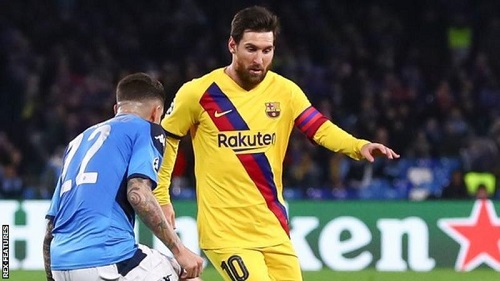 Barcelona's Champions League game against Napoli on 18 March will be played behind closed doors at the Nou Camp because of coronavirus concerns.

"The decision has been made strictly for health reasons," said Joan Guix, Catalunya government's health chief.

It is the second Spanish-Italian Champions League fixture at which supporters have been banned, following Valencia versus Atalanta on Tuesday.

READ ALSO:Â All sport in Italy suspended because of Coronavirus outbreak

Getafe's game with Inter Milan in the Europa League suffered the same fate.

Paris St-Germain's Champions League match against Borussia Dortmund on Wednesday will also be closed to fans.

All sport in Italy has been suspended until at least 3 April because of coronavirus. The ruling includes Serie A matches but not Italian clubs or national teams participating in international competitions.

Reports state that Spain's La Liga is expected to declare that its forthcoming matches will be played behind closed doors.

Manchester United's Europa League last-16 first leg match at LASK Linz in Austria on Thursday could also be played without fans being admitted.