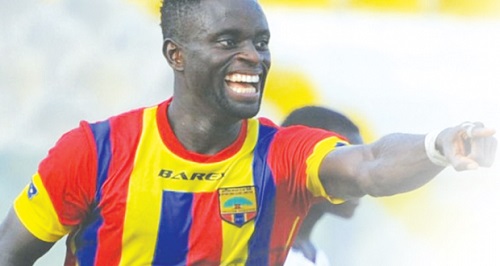 Cosmos Dauda has admitted he is interested in a return toÂ Hearts of OakÂ in the future.

"Hearts of Oak is a big club and I will always remain grateful to the club," he told Asempa FM.

"I will always welcome the opportunity to play for the club again.

"I know at the right time, I will return to the club again," he added.

CosmosÂ Dauda left Hearts of Oak to join Lebanese Premier League side Salam Zgharta on a two year in 2019 following the expiration of his contract.

Former Bechem United forward Abednego Tetteh has vowed to prove his work at Hearts of Oak when the league resume.

The lanky forward says the club did the right thing by securing his signature and will prove what is made of when the league bounce from recess.

The 2019/20 Ghana Premier League is suspended until further notice following the spread of the Covid-19 pandemic.

The 29-year-old recently joined the Phobians in the just opened transfer window after training with them for months. waiting for his International Transfer Certificate.

"I'm excited that Accra Hearts of Oak has officially registered me and I will prove myself when the league bounce back.

The goal poacher has moved swiftly to denied reports that he penned a four-year deal with the 1911 club, stating that he ink a 3-year rather.

"I heard people saying 4-year deal but there's no fact on that.

Sharing his thought on Ademola Kuti who has signed a two-year-deal withÂ Hearts of Oak. Abednego Tetteh full of praise for the Nigerian striker.

"I personally know Ademola Kuti in India and I must confess he is a great playmaker.

"He is a replica of Togolese talisman Emmanuel Adebayor so people should watch out for him," he disclosed.