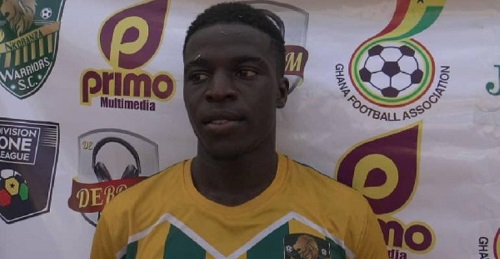 The Phobians who have been busy in the current transfer window have added the forward to their fold.

However, the striker has been loaned back to Nkoranza Warriors for the restÂ of the 2019/2020 season in order to continue getting regular first-team and remain on the positive upward trajectory.

Confirming Isaac Mensah's move to Hearts, PRO for Nkoranza Warriors Habib Mohammed said, â€œFor the past one week, Coach Edward Nii Odoom and the management of Hearts discussed with us of a possible addition to his squad in the attacking department.

â€œPreferably, a young chap that can understudy the current strikers and takeover when they depart.

â€œSo they brought a transfer request and asked for the availability of Isaac Mensah which the player showed interest. We met with officialdom to complete the deal last Friday.

â€œAlthough he has signed for Hearts, he has been loaned back to us for the rest of the season. He will officially join Hearts at the end of the seasonâ€.

He added, â€œIf the season bounces back, Isaac Mensah will complete the 2019-2020 season with Nkoranza Warriors as part of the agreement we had with them".

Meanwhile,football activities in the country have been suspended as part of measures to control the spread of Covid-19.