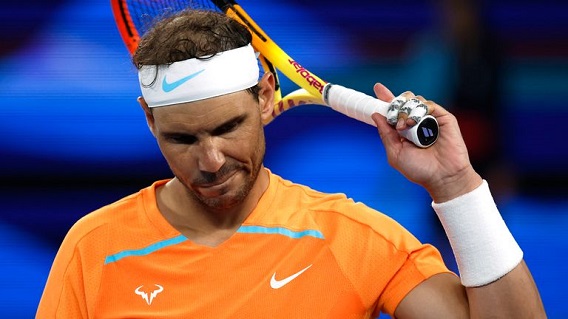 Defending champion Rafael Nadal is out of the Australian Open after picking up a hip injury in the second set of his second-round match against Mackenzie McDonald.

The Spaniard was trailing 6-4 5-3 when he pulled up with his injury. He immediately called on the trainer at the end of McDonald’s service game before leaving the court for a medical timeout.

After Nadal returned to the court and played out the second set, the 36-year-old continued and fought on valiantly, but ultimately was not fit enough to force a fourth set.

McDonald will play either Dalibor Svrcina or Yoshihito Nishioka in the third round.

“It was actually really tough to stay mentally engaged," McDonald said after the match. "But I found a way to pull it out so I’m happy.

“He’s an incredible champion. He’s never going to give up regardless of the situation so even closing it out like a top guy like that is always tough.

“Last time I played him was on [Court Philippe] Chatrier (the French Open) and he kicked my butt.

“On clay court it is tough to hit through but on hard I like my chances. I wanted to take it to him on the hard court, I’m thankful I got that opportunity and I got away with it.”

McDonald got off to a dream start on Rod Laver Arena, capitalising on some early errors from Nadal to break in the very first game. He clinched a second break to go 4-1 up with a forehand passing shot down the line.

Nadal was unhappy with chair umpire Marijana Veljovic about the shot clock, complaining it took too long to get to the towel between points.

The 22-time Grand Slam champion pulled one of the breaks back, but he was struggling to counter McDonald’s superior movement and power off his forehand.

The American held his composure to serve out the set, forcing Nadal onto the back foot before sealing it in 46 minutes.
A remarkable 24-shot rally in the first game of the second set was won by McDonald to give him three break points.

McDonald took the first one as Nadal struck a backhand into the net. Nadal restored parity in the fourth game, breaking McDonald who made an unforced error.

Two missed volleys in a row from a frustrated Nadal saw McDonald regain his break advantage to move into a 4-3 lead.
In the next game, Nadal pulled up with a hip injury which greatly restricted his movement and called for the trainer.

After a short delay, Nadal returned to the court but still did not look comfortable as he served to stay in the second set. With Nadal’s movement clearly restricted, he hit three forehands into the net and McDonald took the second set.

Nadal was hardly moving at the start of the third set with his corner clearly anxious seeing him play on, and his wife Maria seen in tears, but that did not stop him from holding his service games through a combination of excellent aces, forehand winners and volleying at the net.

Nadal did save a break point at 4-4 to hold his serve, but McDonald took his second of three break points with a sliced backhand volley to move within a game of the match.

And McDonald did close it out to secure the biggest win of his career. What the future holds for Nadal remains to be seen. He has now lost seven of his last nine singles matches.