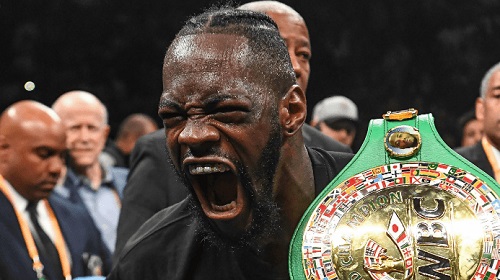 Deontay Wilder vowed to surpass his "idol" Muhammad Ali by knocking out Tyson Fury to land another defence of the world heavyweight title.

The 34-year-old American looked focused on a chaotic Tuesday in Las Vegas, where Fury arrived on an open-top Ferrari for a grand welcome ceremony attended by hundreds of fans.

READ ALSO:Â Â It's impossible for DeontayÂ WilderÂ to beat me on points - Tyson FuryÂ

The Briton, 31, continued to promise a knockout in Saturday's rematch, while his rival eyed moving beyond legend Ali's mark of 10 consecutive defences of the heavyweight title.

"It will be an amazing feeling, my 11th consecutive defence," said Wilder.

Speaking to theÂ 5 Live Boxing with Costello & Bunce podcast,Â he added: "It was a basic plan for me to get into boxing, become a journeyman and make a few dollars for my daughter.

"I never thought about being heavyweight champion of the world and being tied with my idol Ali.

"Once I've beaten Fury with a devastating knockout, I will go on even further to break the record and do more amazing things."

Wilder would trail only the likes of Joe Louis, Larry Holmes and Wladimir Klitschko on the list of heavyweights with the most consecutive defences of the world title if he beats Fury 14 months on from theirÂ controversial draw in Los Angeles.

The American is focused on that piece of personal history, and Tuesday's healthy grand arrival turnout showed that fans are already captivated by events in Las Vegas.

The MGM Grand hotel, which stages the fight in its 17,000-seat arena, already has an unprecedented three boxing rings set up on its ground floor, which is hosting television broadcasters.

US sports networks are awash with build-up, while promoters Top Rank are selling tickets at $100 (Â£77) a piece for fans to watch the fight on big screen televisions at five venues in the city.

"To someone who has been here many times, this feels massive," said BBC Sport boxing correspondent Mike Costello.

Wilder has chosen to base himself in a suite at the MGM Grand, while Fury is stationed at a house a few miles from Vegas' famous strip.

Both fighters continue to be swamped by media commitments, with Fury telling fans he was "on fire" for a bout he regards as the biggest since Ali fought Joe Frazier in an event dubbed the "fight of the century" in 1971.

"We are going to pressure and pressure, put him on the back foot from round one and keep him there," Fury told BBC Sport.

"It's going to be an early night. I'm coming for the knockout."