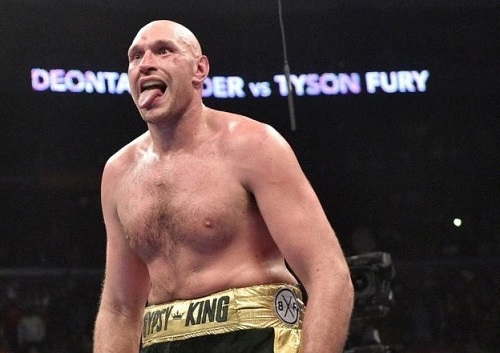 Tyson Fury says a points defeat against Deontay Wilder is impossible as his style of boxing suits Las Vegas.

Fury, 31,Â drew with Wilder in Los Angeles in 2018Â and he hopes to avoid controversy by securing a knockout in their rematch on Saturday.

But he said similarities in his style with Floyd Mayweather - who landed 15 wins by decision in Vegas - is reason for his confidence in the judging.

"That slick style works and the judges here like that," Fury told BBC Sport.

"Wilder can't beat me on points, it's not possible. This is Las Vegas, not Los Angeles.

"One of the greatest boxers that has ever lived in Mayweather has come from this town and they can appreciate a master boxer here.

'The Bully will fold'

Fury conducted media commitments at the offices of his US promoters Top Rank on Monday, a short drive from the Las Vegas strip where his bout with WBC world heavyweight champion Wilder can be seen advertised on billboards and blackjack tables.

He spoke glowingly of his first camp under trainer SugarHill Steward after his split from Ben Davison and will also fight for the first time since appointing Conor McGregor's nutritionist George Lockhart as his personal chef.

Those closest to the British heavyweight believe his dietary changes have offered notable results. The team have also appointed legendary cuts man Jacob 'Stitch' Duran to ensure the damage caused by a cut that required 47 stitches in Fury's last fight does not pose an issue.

Fury continues to predict a second-round stoppage of Wilder - who has never been floored as a professional - and trainer Steward told BBC Sport he was brought into the team because he is a "knockout architect".

"To knock out a knockout artist you have to make them go backwards and back them up," Fury told the BBC Radio 5 Live Boxing podcast.

"Wilder is used to coming forwards his whole career. He has never knocked anyone out on the back foot.

"All bullies when they are backed-up, fold. Wilder is no different to any other playground bully. When someone stands up to Deontay Wilder, he will fold. I will prove that on Saturday.

"Technically he is not so great. Fighting Deontay Wilder is like giving a seven-year-old an AK-47 in a room, fully loaded. He is easy to control but could let rip any time.

"He can throw punches from novice angles that usually a world champion or high-level professional wouldn't throw. They come from the floor sometimes or around corners so you have to have your wits about you."