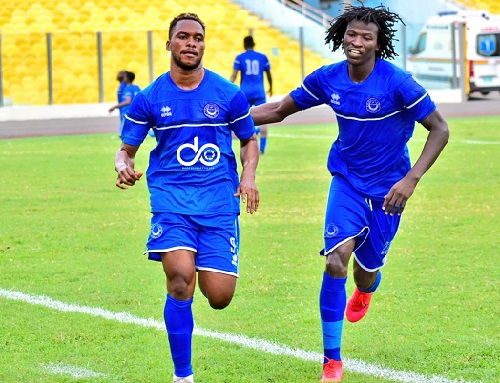 Asante Kotoko has debunked assertion that its sponsors Hisense will pay Al Hilal striker Vinny Bongonga GHC5,000 for scoring the winning goal against the Porcupines in the CAF Champions League clash

The Kumasi based club last month signed a three-year sponsorship package worth GHC 3 million while the club will also get a GHC 250,000 worth of Hisense products to furnish the Kotoko Adako Jachie Project when it is completed.

As part of the three-year sponsorship agreement between the Kotoko and Hisense Ghana, opposing players who score winning goals-against Kotoko in a league game are due GHC5,000.

However, Acting Communications Manager of Kotoko, David Obeng Nyarko says the GHC5,000 reward is players who score the winning goal against the Porcupine Warriors in a Ghana Premier League home only.

"Kindly disregard any publication that claim that Vinny Bongonga (Al-Hilal player who scored the winning goal) will be rewarded with a token of Ghs 5,000.00 from Hisense. The assertion is untrue,'' he posted.

For the avoidance of doubt, this particular aspect of the Hisense deal is solely for the Ghana Premier League.

It is a challenge from Hisense to Asante Kotoko players not to lose matches. Hisense therefore shall reward Asante Kotoko a cash amount of Ghs 5,000.00 for any match Asante Kotoko does not lose (Meaning for the 4 premier league matches unbeaten , Asante Kotoko makes Ghs20,000).

Every football club in Ghana is already motivated when facing Asante Kotoko because we are the best . This deal is rather an innovative income generation means , as for matter of certainty , Asante Kotoko will go unbeaten in more than 70% of all our league matches."

For the avoidance of doubt, this particular aspect of the Hisense deal is solely for the Ghana Premier League.

Sudanese side Al Hilal on Wednesday showed their quality as they defeated Asante Kotoko by a slim margin in the first leg of the CAF Champions League.