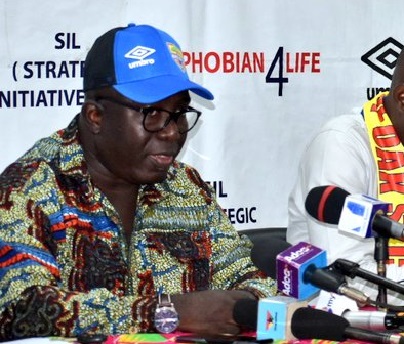 Hearts of Oak has quashed reports that their Managing Director Frederick Moore has personal interest in some players.

Frederick Moore has come under serve criticism from the supporters of the club in the last couple of days as they believe the former has failed to sign the list of players submitted by head coach Edward Nii Odoom.

Clearing the air, the 1911 club said reports making rounds that their MD has failed to finalized their signings are untrue.

"Hearts of Oak can state that reports making rounds that our MD has personal interest in some players are entirely false and without merit. He is currently providing free accommodation to some youth players until when the Pobiman project is ready to house them.

Hearts of Oak wants to place on record that the Board has not finalised the player recruitment list and hence appealing to all to disregard reports that the MD has failed to finalized their signings."

In a related development, Hearts of Oak last weekÂ wrapped up the signing of Nigerien international midfielder Abdourahamane Mamane Lawali to reinforce their squad.

In a move to strengthen their squad before the suspended Ghana Premier League resumes, the 1911 club secured the services ofÂ the Niger national team player and formerÂ Al-MerrikhÂ midfielderÂ on a 2-year deal.

The club have earlier announced that they will be making four signings in this current window.

Mamane signing is one of four players to be announced by the club this transfer window.