Dominic Calvert-Lewin gets Everton off to winning start against Tottenham 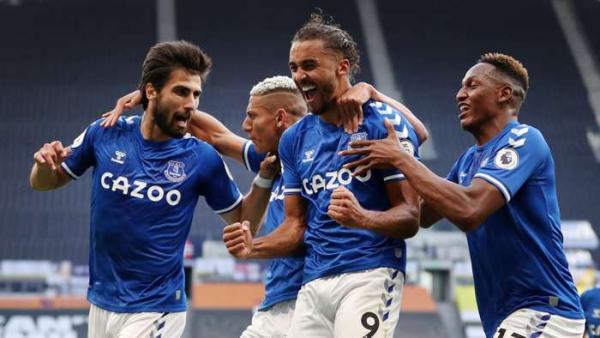 Dominic Calvert-Lewin nodded the only goal on Sunday as Jose Mourinho's second season at Tottenham started with a 1-0 home defeat to big-spending Everton.

Mourinho arrived at Tottenham Hotspur Stadium last November and guided a struggling Spurs side to sixth and a Europa League place, but improvement was anticipated heading into the new campaign.

Tottenham were outplayed by Everton, though, who gave debuts to James Rodriguez, Allan and Abdoulaye Doucoure and might have led long before Calvert-Lewin's brilliant 55th-minute header.

Mourinho's men could not muster a response and are already searching for answers at the start of a brutal stretch in which they could play as many as nine matches before the October international break.

Everton were gifted a huge chance to take the lead after 16 minutes as Ben Davies' wayward crossfield ball escaped Toby Alderweireld and the alert Richarlison pounced.

READ ALSO: Arsenal give Fulham an unfriendly welcome to the Premier League

The Brazil forward rounded Hugo Lloris but, with the angle narrowing, ignored Calvert-Lewin in the centre and awkwardly hacked over a gaping goal.

Jordan Pickford twice came to the visitors' rescue with big stops, turning Dele Alli's shot over the top and blocking from Matt Doherty, while James curled a 20-yard effort wide.

Mourinho replaced Alli with Moussa Sissoko at half-time, but Tottenham trailed 10 minutes after the restart as Calvert-Lewin towered over Eric Dier with a superb header from Lucas Digne's free-kick.

Richarlison twice bent attempts beyond the right-hand post, yet the single goal proved enough as Spurs struggled at the other end in a concerning early loss.