England thrashed 4-0 at home by Hungary in Nations League 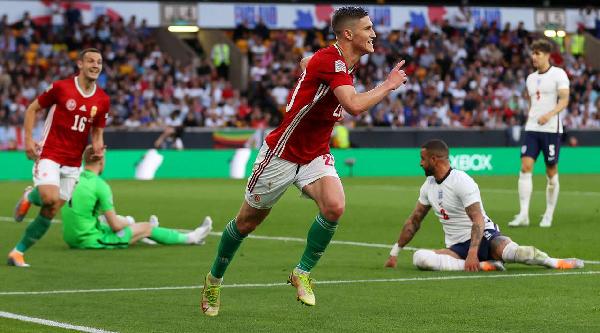 England’s miserable run in the UEFA Nations League continued with a shocking 4-0 defeat to Hungary at Molineux.

Gareth Southgate made nine changes to his line-up as he once again shuffled his pack and his team struggled for rhythm for long periods of a disjointed display.

The visitors were the better side for much of the opening 45 minutes and claimed a deserved interval lead when Rolland Sallai punished some sloppy defending with a clinical volley on 16 minutes.

England’s best opportunity came when Hungary goalkeeper Denes Dibusz made a fine save to stop Willi Orban from heading a Bukayo Saka cross into his own net.

The hosts did move up a gear after the break but it was Hungary who doubled their advantage 20 minutes from time when Sallai took advantage of some sluggish play by Kalvin Phillips to stab beyond Aaron Ramsdale.

Harry Kane then hit the bar with a header but England were left stunned again when Zsolt Nagy rifled in a 20-yard strike on 80 minutes.

The third goal was greeted by boos from the Molineux crowd and England’s evening got worse soon after when John Stones was harshly sent off for a second bookable offence.

Substitute Daniel Gazdag raced clear to clip a delightful finish past Ramsdale a minute from time to compound the Three Lions’ misery.

The result means Southgate’s men remain rock bottom in Group A3 on two points from four games. Hungary are top on seven points with Germany a point behind in second following their home win over Italy, who drop to third.

England will now take a break until the end of September when they will complete their Nations League pool with matches away to Italy and at home to Germany.