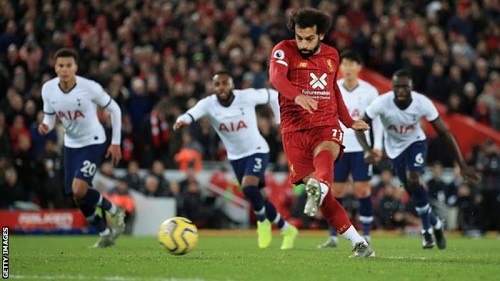 Liverpool needed two second-half goals to come from behind to beat Tottenham at Anfield and restore their six-point lead at the top of the table.

Harry Kane scored within 48 seconds of kick-off and keeper Paulo Gazzaniga pulled off a number of impressive saves to give Spurs a 1-0 lead at half-time.

Jordan Henderson equalised six minutes after the break before Mo Salah thumped the winner from the penalty spot.

In a repeat of June's Champions League final, Liverpool once again came out victorious and have dropped just two points in the Premier League this season.

They were made to work for it - needing several big chances to score before Henderson eventually slotted his half-volley into the far corner early in the second half.

That came moments after Son Heung-min had smacked the crossbar for the second time in the match - his first effort was nodded in by Kane from seven yards out for the opener.

But Liverpool's pressure eventually took its toll when Serge Aurier caught the back of Sadio Mane's leg and gave away a penalty, which Salah smashed past a stationary Gazzaniga with 15 minutes left.

Elsewhere Manchester United returned to winning ways by recording a 3-1 win over Norwich City. Goals from Scott McTominay, Marcus Rashford and Anthony Martial before a consolation from Onel Hernandez saw the Red Devils left Carrow road with the maximum points.