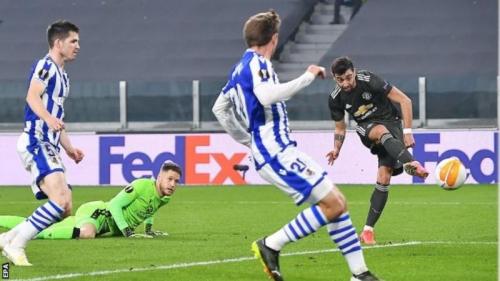 Bruno Fernandes continued his magnificent season with a goal in each half as Manchester United took firm control of their Europa League last-32 tie with Real Sociedad.

Fernandes took advantage of hesitant defending to open the scoring in Turin and then stroked in from the edge of the area for a second - which was awarded by VAR after he was initially flagged offside.

Marcus Rashford and Daniel James - who both missed several chances - then scored on the counter to leave next week's return leg looking a formality.

Sociedad were top of La Liga when the draw was made but were poor throughout a game played in Italy because of Covid-19 restrictions.

They failed to test United goalkeeper Dean Henderson seriously and were constantly caught out on the break by the pace of Ole Gunnar Solskjaer's frontline.

Even Manchester City hero David Silva - who joined Sociedad last August - was kept quiet on an off night.