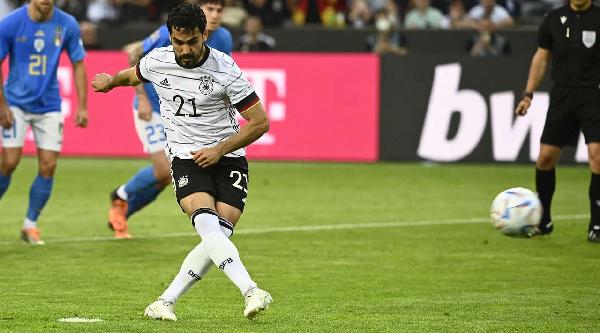 Germany were on the front foot from early on, and their opener in the 10th minute felt like a long time coming.

David Raum received the ball on the left, and with no Italian defenders around him, he curled a fantastic cross into the box for Joshua Kimmich to control and slot home.

Germany continued to dominate the ball, and with 75 percent possession in the first half, it was clear that Roberto Mancini needed to make a change.

The Italian manager decided to take off Matteo Politano and bring on Luiz Felipe to switch to a back three in the hopes that the visitors would see more of the ball.

Five minutes later, however, a clumsy challenge from Gianluca Mancini against Jonas Hofmann in the box meant that the referee had no choice but to point to the spot.

Ilkay Gundogan’s penalty was a powerful shot straight in the middle, doubling the German's lead right on the stroke of half-time.

Italy made a couple more changes after the break, and they started brightly, but Thomas Muller made sure that was short-lived after his low and powerful shot from a half-clearance gave Germany their third of the night.

Werner then got in on the action, scoring two goals in two minutes to truly humiliate the visiting team.

His first was from a fantastic team play, as Serge Gnabry’s cross into the box allowed him to score from close range.

The second was about as easy as it gets, with goalkeeper Gianluigi Donnarumma giving the ball away to Gnabry, whose quick pass to Werner allowed the striker to slot it home into an empty net.

Italy managed to pull one back in the 78th minute, with Wilfried Gnonto scoring his first international goal for his country, after getting on the end of a Manuel Neuer rebound, and reducing the deficit to make it 5-1. Alessandro Bastoni struck a second for Italy deep into injury-time.