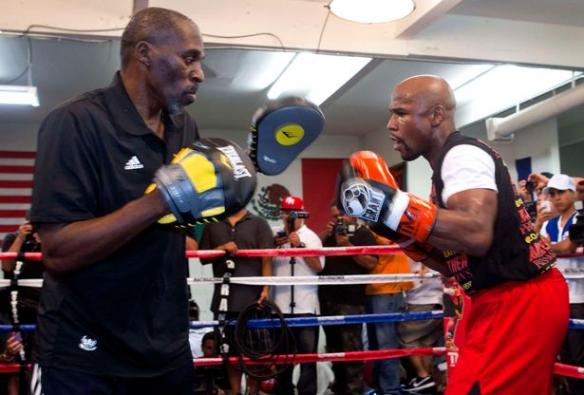 Floyd Mayweather has vowed to become one of the world's best boxing coaches following the passing of his uncle Roger.

Roger, who was a former two-weight champion, passed away at the age of 58. 'Black Mamba' was held in high regard in the boxing world for his exploits inside and outside of the ring.

Many credit the late Roger for moulding his nephew into one of the greatest fighters of his generation.

Floyd owes a large portion of his success to his late uncle, who he plans to honour by becoming a coach.

â€œDue to the recent passing of my uncle Roger, Iâ€™ve felt inspired to help those around me the same way they have been there for me throughout my boxing career," he said.

"In a time where we must distance ourselves from others, it has allowed me to reflect on how I want to make a difference in people's lives and help them achieve their goals.

â€œA true trainer wants the best out of their fighter and pushes them to the best of their abilities. I am new to helping people train as Iâ€™ve always been on the other side of the mitts.â€

Despite his cockiness and bravado, Mayweather admits all his success inside the ring won't necessarily make him a great coach.

He said: â€œA fighter could be impressive at mitt work but it doesnâ€™t make him a great fighter.

â€œA trainer could be impressive on the mitts but it doesnâ€™t make him a great trainer. It has become a goal of mine to help others reach the best versions of themselves and walk with it in confidence.

â€œI want to leave an impression on those around me and allow them to see their potential.

â€œThis quarantine period has allowed me to see the importance of unity and helping others grow.

â€œI want to do my part on this earthÂ and allow people to see the potential in themselves so that they can share it with the world.

â€œI am new at training and so far I've been working with people with no boxing experience, therefore we are growing together.

â€œBut I promise you, I will be one of the best trainers in the world. Inspire and be inspired.â€

'Money' was planning to return to the ring later this year but has reportedly shelved those plans following the deaths of his uncle and ex-girlfriend Josie Harris.