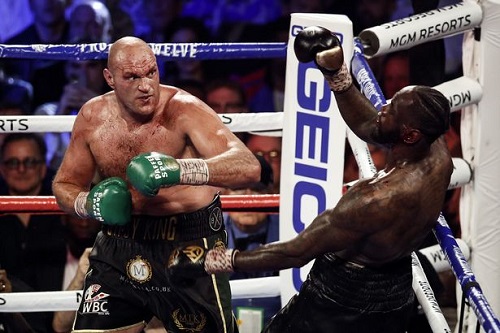 Tyson Fury has vowed to punish Deontay Wilder again when the heavyweight rivals step inside the ring for a third time.

Wilder was dethroned as the heavyweight world champion when Fury stopped him in the seventh round last month.

The American fighter immediately triggered the rematch clause in his contract with the trilogy fight pencilled in for July 18 at the MGM Grand in Las Vegas.

But the coronavirus crisis looks set to push the heavyweight title fight back to October.

Regardless of the delay, though, Fury is eager to renew their rivalry, admitting he takes "great pride" in beating Wilder.

â€œIâ€™ll be obliged to give him a bit more," he told ITV's Good Morning Britain.

â€œYou never get bored of beating Deontay Wilder, obviously. Itâ€™s one of those things you take great pride out of doing.

â€œI really did what I said I was going to do. Not many people, in boxing especially, say something then do exactly what they said they were going to do.

â€œI was proud of that performance. Iâ€™m looking forward to getting this coronavirus out of the way, getting the world back on track and getting back to my job.â€

Fury also opened up on life during this lockdown period, admitting he has had to improvise to maintain his fitness levels.

He added: â€œItâ€™s quite difficult because obviously Iâ€™m not allowed to go to gyms and train.

â€œHowever, I have been doing, every morning at 9am, a workout video live with the world on Instagram.

â€œWe do a 50 minute workout, it really helps stay in shape, and it helps many, many people joining in from around the world.

â€œIâ€™m very grateful I can help people with their fitness and their mental health troubles in these lockdown times.â€