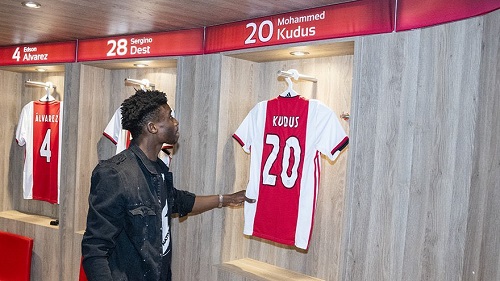 Kudus Mohammed last week made a switch from Danish side FC Nordsjaelland to Dutch the champions in a move worth 9 million euros, penning a 5-year-deal until June 30, 2025.

READ ALSO: Kudus Mohammed reveals why he didn't choose No.34 jersey at Ajax

George Boateng in an interview was elated the four-time Champions League winners have signed the youngster who he says has huge potential.

"The reason why Holland and Ajax is bringing him in this way is because they can see what I have seen."

“He has got such a huge potential.

“What a talent to have among the squad.

“With Ziyech being sold to Chelsea they were looking for someone similar to that and found Mohammed Kudus and that says a lot.

Kudus Mohammed will wear the jersey number 20 at his new club.