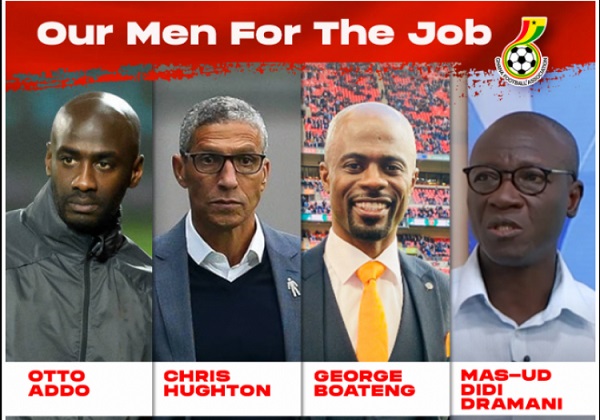 The Ghana Football Association (GFA) have announced the appointment of the technical team of the Black Stars until December 2022.

In a statement, the GFA said Otto Addo, who helped the Black Stars reach the 2022 World Cup finals in Qatar, will be assisted by George Boateng, and Mas-Ud Didi Dramani while former Newcastle United manager Chris Hughton retained his role of Technical Adviser.

"The Ghana Football Association has appointed Otto Addo, Chris Hughton, George Boateng and Mas-Ud Didi Dramani as coaches of the senior nationwide staff, the Black Stars till the top of December 2022.

The quartet who masterminded Ghana’s qualification to the FIFA World Cup Qatar 2022 event will keep on to see to Ghana’s preparation to the world cup, the 2023 AFCON qualifiers and the world cup itself.

This follows an exhaustive negotiation and engagement with all related stakeholders together with the Ministry of Youth and Sports.

The Coaches will quickly identify their squad for Matchday 1 and a couple of of the TotalEnergies Africa Cup of Nation Cote D’Ivoire 2023 qualifiers and the four-nation event in Japan."