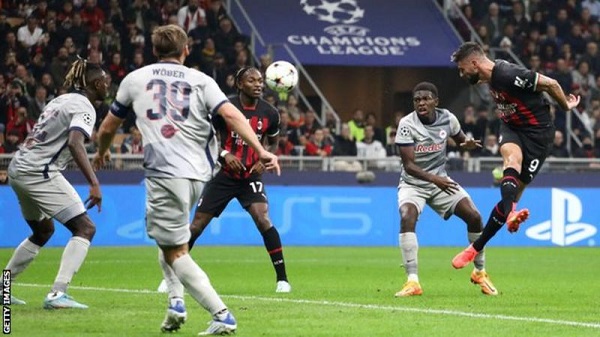 Olivier Giroud scored twice and created another goal as AC Milan beat Red Bull Salzburg 4-0 at the San Siro to progress to the Champions League knockout stage for the first time in eight years.

The Italians needed to avoid defeat in their final Group E game to reach the last 16, while Salzburg needed to win.

Giroud headed in an early opener before assisting Rade Krunic to score.

Veteran striker Giroud drilled in his second and Junio Messias wrapped it up with a solo goal in stoppage time.

At 36 years and 33 days, Frenchman Giroud became the oldest player to score a double in the Champions League for Milan since Filippo Inzaghi against Real Madrid in November 2010.