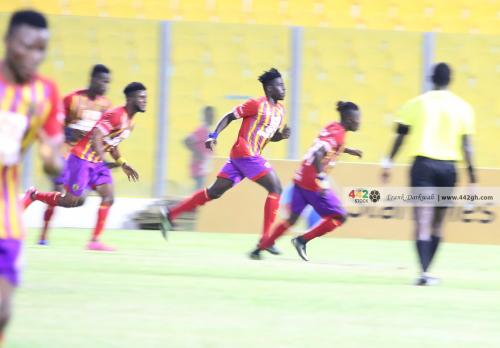 Hearts of OakÂ kept up the pressure on Ghana Premier League leadersÂ Asante Kotoko with a 2-0 victory overÂ Elmina Sharks.

Strikes from Isaac Mensah and Benjamin Afutu ensured the Phobians picked the maximum points on Sunday to keep their title hopes alive.

Despite their dominance in the opening first 45 minutes at the Accra Sports Stadium, the Phobians struggled to find the breakthrough.

Hearts squandered a golden opportunity to take the lead after they were awarded a penalty on the stroke of half time.

However, Victor Aidooâ€™s kick was saved by the Sharks goalkeeper to keep the scores at 0-0 at the break.

After the recess, the home team kept probing for the opener with no success until past the hour mark when the stars finally aligned in their favor.

Hearts got their noses in front in the 65th minute after Isaac Mensah capitalized on an error from Sharks to put his team ahead.

Sharks goalkeeper Lord Bawa Martey struggled to control a back pass from Suraj Ibrahim and his clearance came off the substitute straight into a yawning net.

Midfielder Benjamin Afutu put the result beyond doubt in the 79th minute to make it three wins in a row for Coach Samuel Boadu.