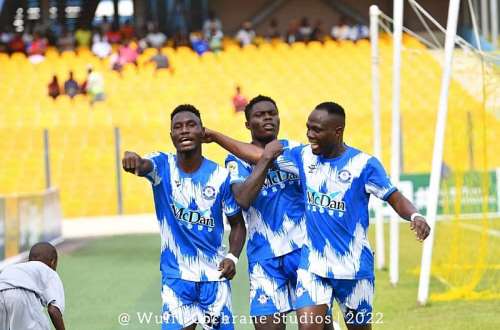 Accra Great Olympics beat Medeama SC 1-0 to extend their unbeaten run in the betPawa Premier League. Striker Yussif Abdul Razak scored the only goal of the match in the 79 minute to give the host all the points in their Matchday five fixture at the Accra Sports stadium on Monday.

It was an exciting contest as both sides struggled to break the deadlock but Yusif Abdul Razak’s late goal was enough to see the Dade Boys beat the Tarkwa-based side.

The Accra giants are enjoying a good run in the betPawa Premier League this season having played five games without defeat.
They returned to the winning ways following last weekend’s goalless draw with FC Samartex while the Mauves and yellow extended their winless run to three games following defeats to Berekum Chelsea and Aduana FC.

The win takes Great Olympics to the third position with eleven points – two points behind leaders Aduana FC who are on 13 points.
Medeama SC started the season in an astonishing manner after picking two staright victories against Legon Cities and Real Tamale United. But the Tarkwa lads have lacked the cutting in their last three outings as they sit in 12 place with six points.

Medeama SC will host Asante Kotoko on Matchday six of the betPawa Premier League at the Akoon Park in Tarkwa on Saturday, November 12, while Great Olympics face Legon Cities in the Accra derby on Friday, November 11, at the El Wak stadium.