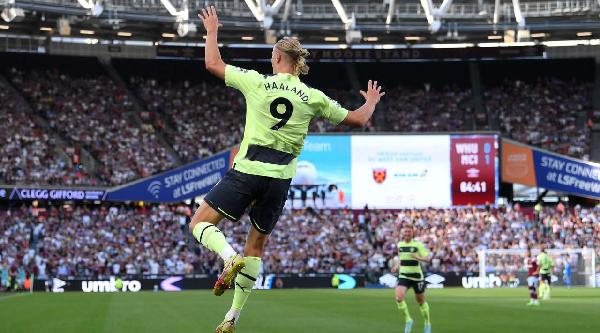 Erling Haaland became only the second Manchester City player after Sergio Agüero to score a brace on his Premier League debut in a comfortable 2-0 win over West Ham United at the London Stadium.

West Ham have proved to be a tough nut to crack for City in recent years, after holding Pep Guardiola’s side to draws in each of their previous three meetings at the London Stadium.

The Hammers nearly made the ideal start when Michail Antonio headed over from a Pablo Fornals cross inside the opening three minutes, but City soon found their rhythm and began to dictate the play in East London.

João Cancelo picked out Kevin De Bruyne in space, but the Belgian fired wide, while Haaland saw his header go wide of the target from Phil Foden’s enticing cross. There was also an early casualty for the hosts when Łukasz Fabiański withdrew through injury, forcing Alphonse Areola to take his place between the sticks.

The tide of attacks from the visitors continued as De Bruyne had an effort ruled out for offside after sliding the ball home from İlkay Gündoğan’s delivery. Guardiola’s men didn’t have to wait long for the inevitable breakthrough, as Haaland confidently dispatched a spot-kick into the bottom left-hand corner for his first Premier League goal after being brought down by Areola in the box. It was a well-deserved lead in what had been like a training exercise for the champions up until this point, claiming 79 percent of possession in a comfortable first half.

The Hammers began the second half with renewed vigour, and skipper Declan Rice cut a frustrated figure after his long-range effort cleared the bar. City were able to quickly ramp up the tempo though, and Gündoğan was disappointed to flash his effort wide following some superb link-up play between Foden and De Bruyne. The second goal did eventually come from Haaland when the Norwegian opened up his body to produce a deadly left-footed finish from De Bruyne’s sumptuous through ball.

City saw out the remainder of the second half with relative ease ahead of their first home match of the season against AFC Bournemouth next Saturday. Meanwhile, West Ham turn their attention to a match away at Nottingham Forest a week today.