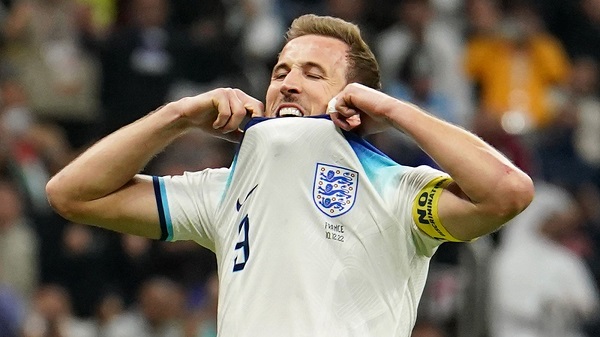 Harry Kane blazed a late penalty over the bar as England's World Cup dreams ended with a 2-1 defeat in the quarter-finals to defending champions France.

The England captain had already converted from 12 yards earlier in the game to level after Aurelien Tchouameni's thunderbolt had put France ahead and he was given a golden opportunity to equalise for a second time after Olivier Giroud's header when Theo Hernandez recklessly barged into Mason Mount.

His first penalty had taken Kane level with Wayne Rooney's England scoring record of 53 goals and meant he'd scored more penalties in normal time at World Cups than any player ever. But with six minutes to play, and the pressure huge, he smashed his second spot kick high over the bar. Kane looked devastated. There was no way back and at the final whistle he was inconsolable.

Referee Wilton Sampaio had initially overlooked the foul on Mount before VAR advised him to check the pitchside monitor and England were frustrated throughout this enthralling contest by decisions from the officials, with a challenge on Bukayo Saka not given as a foul in the build-up to the opener and a penalty shout from Kane overlooked in the first half.

Jude Bellingham, at 19-years-old and England's youngest player to start a quarter-final, Saka, 21, and Phil Foden, 22, were all exceptional as Gareth Southgate's side duelled with France. Harry Maguire clipped a post with a header at 1-1 and Marcus Rashford lifted a last-gasp free-kick onto the roof of the net.

But ultimately it was a penalty that caused England World Cup heartbreak again.