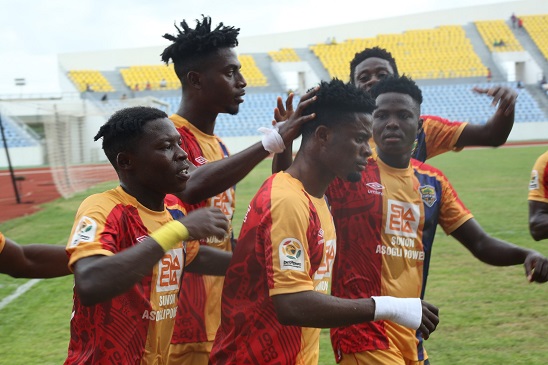 Accra Hearts of Oak recorded a 1-0 win against Nsoatreman FC in their Matchday 9 betPawa Premier League encounter at Nana Konamansah Park on Tuesday.

The former League champions went into the game on the back of three wins, two draws in their last five Premier League outings and needed the points to close the gap at the top of the log. Hearts of Oak Slavko Matic named his side without five key players who are in the camp of the Black Galaxies in readiness for the CHAN tournament in Algeria.

The team was without Gladson Awako, Seidu Suraj, Dennis Korsah, Konadu Yiadom and Daniel Afriyie Barnieh but they marshaled all forces to match their opponents. Kwadwo Obeng Jnr. scored the only goal of the match in the 54th after he got on the end of a goalkeeping howler to pounce home.

Nsoatreman FC goalkeeper Daniel Afadwu clashed with his defender as they failed to communicate whilst dealing with a long ball from Hearts of Oak midfielder Eric Esso - to gift Obeng Jnr. a glorious chance to tap home.

The win takes Hearts of Oak to the second spot with 16 points – three points behind leaders Aduana FC who inflicted a 1-0 defeat on Accra Great Olympics in Sogakope.

The Phobians will take on Bechem United in their next match on Sunday, January 01, 2023.