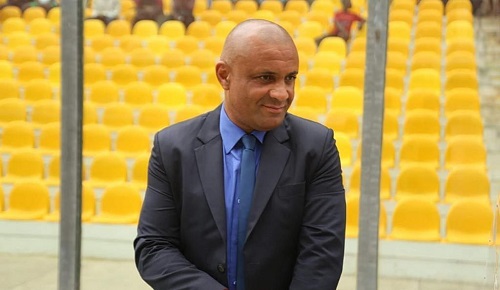 Hearts of Oak coach Kim Grant has vowed to make Accra Sports Stadium a fortress ahead of the new season.

The former manager of Division One League side, Elmina Sharks in an interview with Accra based Angel FM has sent a word of caution to other clubs that he is bent on bringing the fear factor at Accra Sports Stadium back.

Kim Grant who doubles as the technical director of Hearts of Oak further stressed that he is on a mission to build a formidable side that will eventually be a tough nut to crack when domestic football resumes.

According to him, the Normalization period has given him ample time to prepare his team ahead of the new season.

“The Normalization period has helped me prepare my team ahead of the new season. Even though it comes with its own negatives it has really helped me”

The Phobians have played a series of friendlies to sharpen up the rough edges before domestic football resumes.

They last week played 3 friendlies with Glo-Lamp Academy, Cape Coast Vipers and Division outfit Sky FC. The Continental club Masters lost the 2-1 in the first game, won 4-2 in the second and drew 1-1 against Skyy FC.