I still have a contract with Horoya AC - Patrick Razak 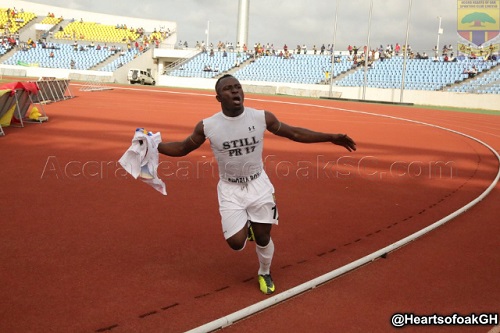 Patrick Razak has revealed that he still has a binding contract with Guinea Ligue 1 club Horoya AC.

According to local media reports last week, the 24-year-old who joined the Red and White on a two-year deal from Ghana Premier League giants Hearts of Oak in October last year has had his contract terminated.

However, the pacey winger has disclosed that the media reports are untrue and he is currently nursing injury the reason he is not part of Horoya AC's first-team squad.

“When I saw the news in the local media, I personally called the President of the club and he told me its never true. He even told me he will be visiting me in due time to see the state of my injury” he told Bryt FM in an interview.

“I don’t want to talk about it because there is no aorta of truth in the report. I don’t want to worry myself on a story which lacks merit” he added.

“It’s never true I have my contract terminated”.

His performance for the Phobian club earned him a place in the Black Stars B.

He was part of the Black Stars B team that won the WAFU tournament in November 2017 for hosts Ghana.