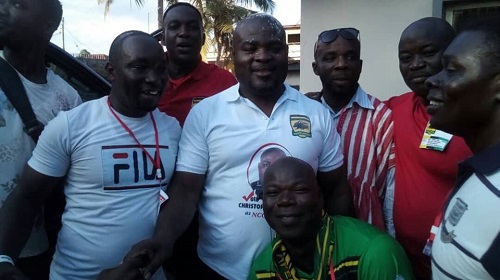 Newly elected Asante Kotoko National Circles Council chairman, Christopher Damenya has stated that he will welcome the decision to join hands with Solomon Ofosu Ware to build the Council again.

According to the businessman, all hands must be on deck as he begins a new chapter to rebuild the Circles.

"My focus now is to bring all supporters on board now that the election is over. There is no Team DeChris and Team Solo again, we are all one family", Christopher Demenya told kickgh.com

"Unity is everything and will plead with all our supporters to avoid anything that will tear us apart".

He added: "I am ready to work with Solomon Ofosu-Ware and I will be elated if he joins, me to build, and develop the Circles again. Everybody is important in the affairs of the Circles now, and I would plead with all the supporters to join hands with me for progressiveness".

Christopher Damenya over the weekend was elected as the chairman of Asante Kotoko National Circles Council.

He beat off competition from Solomon Ofosu Ware to be the new chairman of the Porcupines supporters.

In the election held today at club's secretariat at Kwadaso in Kumasi, Christopher Damenya pulled 209 votes as against his competitor 118.