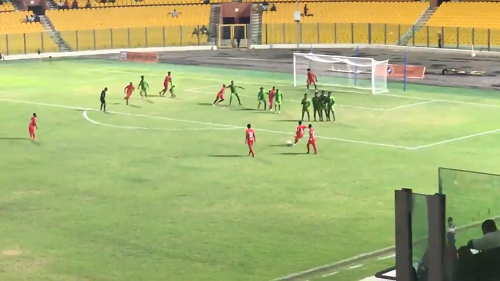 IbrahimÂ scored from a dead ball situation as the Porcupines bounced from defeat to beat Bechem United at the Accra Sports Stadium in Ghana Premier League match week 12.

A freekick to start your day with?@AsanteKotoko_SC's Imoro Ibrahim vs Bechem United will do.

Speaking after the gameÂ the formerÂ Thunder FC left-back said his hard work at training has paid off.

"It is something I have been practicing at the training ground and anytime I get training I practice before the session starts."

The Porcupine Warriors beat the Hunter 3-1 to surge to 3rd on the log 2 points adrift of first place.

Bechem United provided Asante Kotoko with a scare as they took the lead in the 20th minute.Â Hafiz Konkoni connected home after latching onto a cross.

The Porcupines for the first time shot into the lead when Agustine Okrah scored on the stroke of half time to make it 2-1 following another clanger fromÂ Prince Asempa.

Kotoko returned to the second half more determined and their effort paid off when Imoro Ibrahim scored a delightful freekick to put the game beyond reach as they ran away with the 3-1 scoreline.

The Porcupines next have an away duel with Karela United at theÂ Akoon Park, Tarkwa